In the last post, we looked at gratitude, happiness and serving others and how your self-talk can guide you in these areas.  The result of your networking will be to increase the odds of building deeper relationships.

In this post we will go under the hood of self-talk, so to speak and explore the mindset that is necessary to good self-talk which will manifest itself in a positive way to others allowing your networking to accomplish its primary goal, to build deeper relationships.

END_OF_DOCUMENT_TOKEN_TO_BE_REPLACED

Networking is something all of us do in one way or another.  It could be with business associates, the checker at the grocery store and the list goes on and on.  When collaborating with small businesses as a business coach in The Woodlands one of the things that is brought up is networking.

Specifically, the owner wants to know if he or she needs to do it.  And, if it is needed, how to be most effective in going about it.  Yet, before we get into whether or not to network, let’s take a look in this post as to the origins of the word networking. END_OF_DOCUMENT_TOKEN_TO_BE_REPLACED

In the previous four posts we have looked at the fears that is based on indifference, indecision, doubt and worry. In this post we will look at timidity. And, like the other fears, timidity at times can certainly be appropriate. Yet, when you are overcome with timidity it will keep you from advancing.

As a business coach in The Woodlands and as a business coach in Houston I have seen and experienced timidity. What is timidity? Quite simply, timidity is overly cautious. Timidity or over caution, will keep people on the sidelines when they need to be in the game of business and life. END_OF_DOCUMENT_TOKEN_TO_BE_REPLACED

In the previous three posts we have looked at the fear that is based on indifference, indecision and doubt. In this post we will look at worry. And, like the other fears, worry has a valid time and place. Yet, when you are consumed with worry it robs you of the energy and focus to accomplish what you have set out to do…

As a business coach in The Woodlands and as a business coach in Houston I have seen worry take people off course and actually make things worse than the worry itself. In my businesses, when I started to hire people and had to make a payroll, I definitely had a great deal of worry. After all, cash flow in the beginning my businesses was not predictable. And sometimes it meant paying everyone except myself. In turn, that created another set of worries. END_OF_DOCUMENT_TOKEN_TO_BE_REPLACED

Indecision is the second enemy or fear that comes from within. Success, in business and life, more often than not, is not as much about circumstances and things as it is about how we see ourselves.

Once again, just like the first enemy, indifference, in the previous post, there is a time where it is absolutely necessary to be indecisive. Yet, if you let indecision rule you, it creates a fear that will leave you out of more opportunities in business and life than you can imagine. In my coaching practice as a business coach in Woodlands and as a business coach in Houston I have observed the negative effects that the fear generated by indecision can cause. END_OF_DOCUMENT_TOKEN_TO_BE_REPLACED

What makes them stronger is several things. First of all, when you admit to your weaknesses, your vulnerabilities, you are showing self-awareness, and this causes others to see you as authentic and to trust you. Secondly, when you and your followers are aware of your vulnerabilities you can give those that support you responsibility for taking care of those things that are not in your strength zone. This gives them ownership which is important in creating a good culture. END_OF_DOCUMENT_TOKEN_TO_BE_REPLACED

Why? The business steps determine the quality of person you bring in the door and ultimately employ. You can bring in people who meet the experience and education qualifications, yet if they are not willing or good at connecting, it will be a never-ending challenge to build a safe and good culture. END_OF_DOCUMENT_TOKEN_TO_BE_REPLACED

In the last post I spoke about some of the foundational components to building a strong culture. It is necessary for people to feel safe and to believe they belong to something bigger than themselves. Also, for a culture to thrive it needs a clear mission, vision and an established purpose.

As a business coach in the Woodlands and as a business coach in Houston, a clear sense of purpose makes the possibilities for growth and advancement of an organization much clearer. Why? With clarity comes pointed and focused action. The individuals and teams who make up the culture have a clear purpose.

Several years ago, a designer and engineer, Peter Skillman, held a competition to find out the following: Why do certain groups add up to be greater than the sum of their parts, while others add up to be less?

To this end he assembled a series of four-person groups at three major universities and a few other places. He challenged each group to build the tallest possible structure using the follow items.

The contest had one rule. The marshmallow had to be on the top. The most interesting part, to me, was not so much the task but the teams he assembled. Some of the teams were business students and some were kindergartners.

The business students strategized. The kindergartners had a different approach. They did not strategize, analyze or share experiences. They were too young, not only to strategize, analyze and share experiences. They did not know how to ask questions, propose options or hone ideas. All of which the business students knew how to do. Their entire technique was about how to bunch stuff together.

In dozens of trials around the country and in other parts of the world, the kindergartners won. Their structures averaged twenty-six inches tall, while the business students’ structures ended up averaging less than ten inches in height. 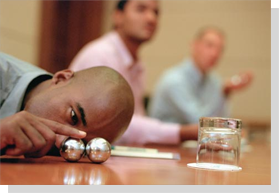 In my personal coaching business I find that one of the most important keys to success is to recognize the “bus stop mentality.” And, having recognized it, do something about it.

What is the “bus stop mentality?” It’s a pattern where you

Keys To Success: What Are Your Distractions?

Distractions can range from always checking email, to surfing the web, to Facebook, to the impromptu meeting, to the phone. There are others but those are some of the major ones. As a self-employed business owner the first step is to become aware of your distractions. The second step is to take control of them. END_OF_DOCUMENT_TOKEN_TO_BE_REPLACED

You will take your new found self awareness and continue to embrace the process of self improvement over and over again as you change your thinking, your habits, your activity, your results and ultimately your life. END_OF_DOCUMENT_TOKEN_TO_BE_REPLACED